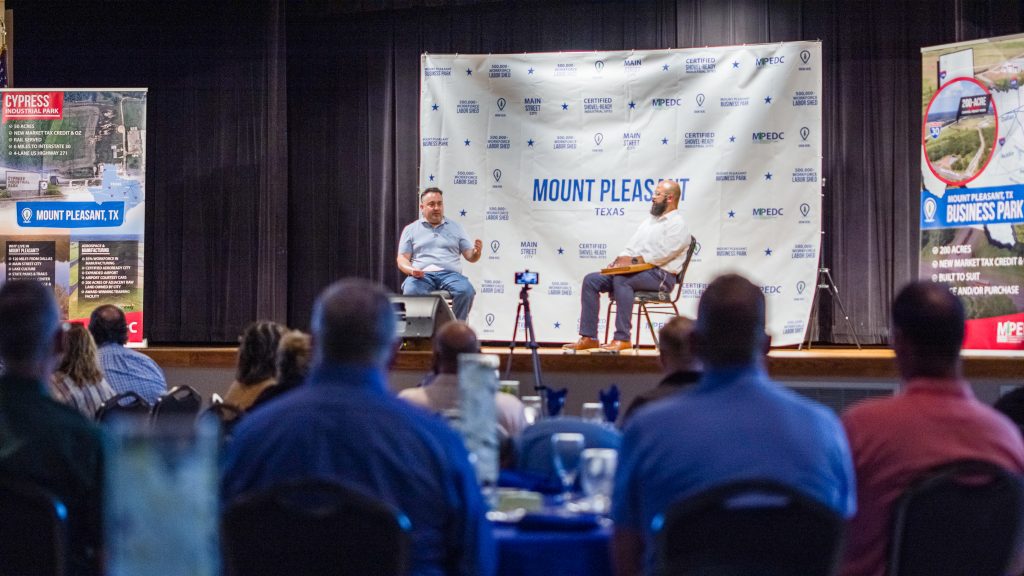 Mr. Grella’s listening tour culminated in a community stakeholder debrief and feedback luncheon held July 16, 2021, at the Civic Center. At the debrief, Mr. Grella said he was impressed by the community’s ubiquitous support during the 3-day listening tour. Mr. Grella said, “Every time I’ve had a meeting, frankly, the bar has gotten a little bit higher.”

Mr. Grella noted Mount Pleasant’s ability to “punch above its weight class” and added that he was impressed with the city’s ~100,000 population retail trade area and positioning as a trade hub along Interstate 30. Mr. Grella said he especially loved Mount Pleasant’s strong coffee game and existing major industries presence. “Your existing industries are your biggest fans and third-party validators,” he said.

Mr. Grella emphasized how the world is changing and evolving rapidly, hence the importance of a strong partnership with the education sectors. Based on his conversations with K-12 and higher education leadership, Mr. Grella said Mount Pleasant is well-positioned to meet current and future workforce needs. Two noteworthy community assets and differentiators in Mount Pleasant were its excess water availability and electric reliability as one of the few areas in Texas connected to the Southwest Power Pool, not ERCOT, which has been the subject of significant criticism following a winter storm earlier in 2021.

With the increase in remote work, Mr. Grella noted that immediately identifiable drawbacks for the community were affordable workforce housing and better broadband service. These drawbacks, he said, were common concerns voiced across all community sectors during his tour.

Mike Grella has over 26 years of economic development experience as an attorney and advisor, helping communities and companies locate, grow, and thrive.

Mike began the first 17 years of his career serving hundreds of clients, including dozens of the world’s most recognized brands on economic development strategy and expansion transactions providing tax, legal, and financing advice.